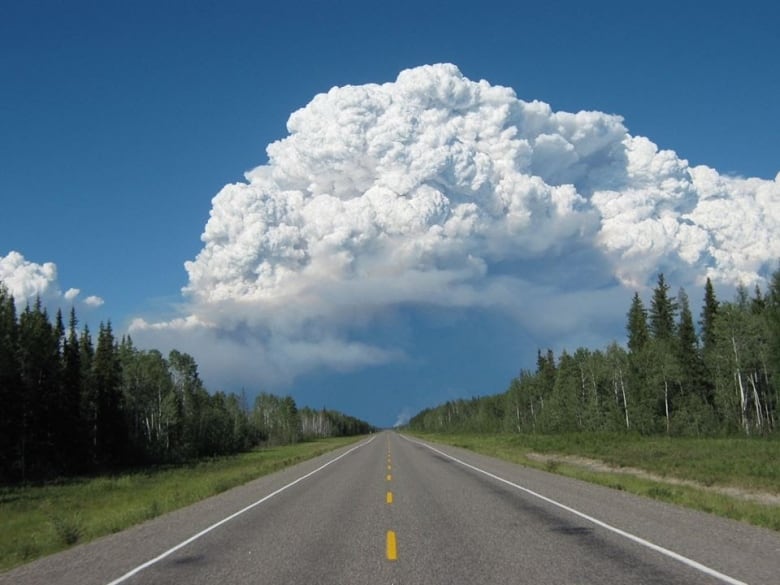 Believe it or not, the colossal clouds that towered over Yellowknife Tuesday evening were pretty average-sized — for a wildfire-generated thunderstorm.

But make no mistake, experts say: such storms are an extreme weather event that carry serious dangers, often sweeping embers into unburnt areas, flaring up new fires and dragging smoke high into the atmosphere where it can have far-reaching and long-lasting impacts on weather.

“To get this, not only do you need a large and intense wildfire, but you also need a certain type of weather conditions that support the thunderstorm to develop over the fire,” explained Dr. David Peterson, a meteorologist with the U.S. Naval Research Lab who studies these storms.

“When this process develops, it basically sets up a giant chimney effect where you have this large, very tall thunderstorm updraft over a fire that is pulling smoke up into it.”

They’re called pyrocumulonimbus clouds — or pyro-Cbs, for short — and the ones that loomed over the North Arm of Great Slave Lake this week reached 10 to 11 kilometres up into the atmosphere, said Peterson, who was watching the phenomenon by satellite.

Tuesday’s clouds rained white ash down on Yellowknife but were still 30 to 40 kilometres away from the city. They were anchored to a 32,567-hectare fire south of Yellowknife across Great Slave Lake, dubbed ZF009-22 by N.W.T. Fire. That lightning-caused fire has been burning since June 19 and is considered out of control, but is being monitored.

These fires can generate their own weather, raining down lightning or hail and causing new fires to start. They create dangerous, erratic winds and make it difficult for aircraft to fly nearby. They can also release smoke at and above the altitude of jet aircraft, creating a visibility hazard at all levels of the atmosphere.

“There’s been some research in recent years showing that the updraft speeds in some of these larger pyro-Cbs can actually rival what you see in a supercell thunderstorm, say, on the Great Plains in the United States — the storms that produce tornadoes,” Peterson said.

As the fire generates these storms, the storms can then pull air in through the fire, creating more intense wildfire behaviour.

Peterson said Tuesday’s storm was the 15th of its kind in Canada so far this year, and not a first for the N.W.T.

Mike Flannigan, a professor of wildland fire at Thompson Rivers University in B.C., said he saw another one develop on satellite over Great Bear Lake a few nights ago. He also pointed to a gigantic wildfire back in 2014 that burned near Highway 3 and created large pyro-Cbs.

And while Tuesday’s cloud was an average-sized pyro-Cb, Flannigan said the importance of the event shouldn’t be diminished.

“This is still a very dangerous fire, and situation. Fortunately, it wasn’t on your side of the lake, or things would be potentially very threatening for the community,” he said.

Peterson said Canada in general appears to be a “sweet spot” for pyro-Cbs, with fires generally happening during a time of year when the weather can create these storms. This year, the storms have been developing across Alaska, the Yukon and the N.W.T. due to the large number of active wildfires.

The country has been home to some of the largest pyro-Cbs on record, including one in B.C. in 2017 that sent “volcanic” levels of smoke into the atmosphere. The smoke travelled around the globe and stayed up there for months. It also brought up a new set of questions for the scientific community around what that might mean for the climate.

“It’s this extreme aspect of the pyro-Cb that’s gained a lot of attention in recent years,” he said.

“If we’re going to get more wildfires, [we might] see more of these larger pyro-Cb outbreaks that sort of mirror the volcanic eruption effect.”

Read more climate stories on our Climate and Environment page.