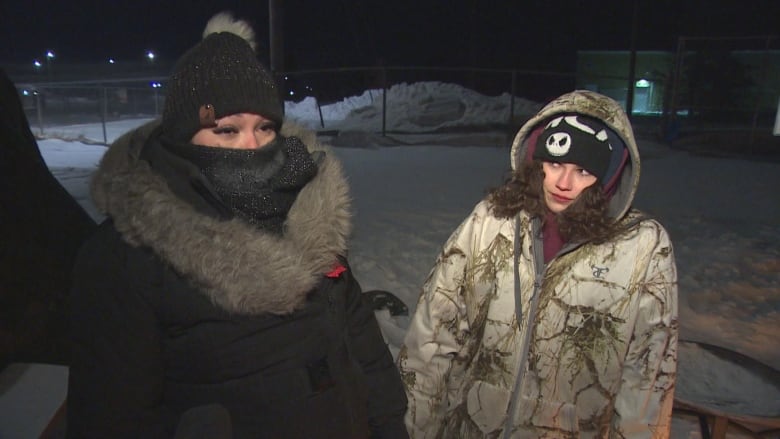 The family of a woman Winnipeg police allege was the victim of an accused serial killer say they’re not being adequately included in planning around a potential landfill search for the woman’s remains.

That has caused “undue stress, trauma and hardship to our family during this incredibly difficult time,” said Kirstin Witwicki, a cousin of Morgan Harris, in an email sent to a committee looking into the feasibility of such a search.

Police believe the remains of both Harris and Marcedes Myran were taken to Prairie Green landfill, north of Winnipeg, after they were killed in May.

Jeremy Skibicki is charged with killing both women, as well as Rebecca Contois, whose partial remains were found at the Brady Road landfill in Winnipeg in June.

He’s also charged with first-degree murder in the death of an unidentified woman, who members of the Indigenous community have named Mashkode Bizhiki’ikwe, or Buffalo Woman. Police have said they don’t know where her remains are.

There have been calls for searches of both the Brady Road and Prairie Green sites, and a committee was struck to guide discussions on the feasibility of a search.

But in a Thursday email sent to that committee, Witwicki wrote the Harris family hasn’t been properly consulted in the discussions.

“I cannot state clearly enough how difficult this has been for our family, especially Morgan’s children,” the email reads.

“Their voices matter and, as their aunt, it is my duty to ensure that their wishes and rights are respected during all phases of this process. Unfortunately that has not occurred.”

Witwicki’s email said she raised concerns with committee members at a Wednesday meeting about a lack of transparency around the creation of a new technical subcommittee, which initially excluded her family.

“I have no question that the intention behind choosing the subcommittee was not done out of malice,” the email reads.

“However, choices concerning who makes decisions about our lost family members must be approved by our family and our involvement in those decisions needs to guide the process.”

Witwicki said that exclusion “was difficult and hurtful to our family,” and was exacerbated in a meeting on Thursday when she made a number of requests on behalf of her family that she said were rejected.

‘We should have a say’

The email said her requests include adding Hilda Anderson-Pyrz, chair of the National Family Survivors Circle, to the feasibility study committee and adding Sandra DeLaronde, a longtime advocate for missing and murdered Indigenous people, to the technical subcommittee.

It also said while an elder was chosen by the Assembly of Manitoba Chiefs to sit on the committee, her family wants to invite an elder they have an existing relationship with.

Witwicki’s email said she also wants an update on the invitation for Myran’s family to join the committee and a copy of the initial feasibility report for a potential search prepared by the Winnipeg Police Service.

“I do not think that what I am asking for is unreasonable,” the email reads.

“My family needs support and our autonomy in choosing the types of support we need going forward should be recognized and not overlooked, or rejected outright.”

Earlier this month, police said they believe the remains of Harris and Myran were transported to the privately run Prairie Green landfill on the same day in May of this year. But by the time they determined that in June, too much time had passed for a search to be feasible, police said.

Cambria Harris, Morgan Harris’s daughter, says her family “should have been involved since June, when they made the initial feasibility study and made the decision not to search [the landfill].”

She says she and her family have not been allowed to read the initial feasibility study made by police, but that her family “absolutely” needs to be a part of the conversations around a potential search, as well as who represents their family during that process.

“Why are all these meetings taking place and we’re only being told about them afterwards?” Harris asked in a Friday interview with CBC.

“We should have a say. That’s what it all boils down to.”

‘Continue to liaise with the families’: police

In an email to CBC, Winnipeg police said they have provided what information they can share to the involved families, given ongoing legal processes.

“We continue to liaise with the families and to participate on a feasibility committee with the community to explore the recovery of the remains of Marcedes Myran and Morgan Harris from the Prairie Green landfill,” the email said.

On Friday, a ceremony was held at the Brady Road landfill, where Rebecca Contois’s remains were found.

Cambria Harris, alongside her cousin Melissa Normand and Elder Geraldine (Gramma) Shingoose, prayed at the site, leaving tobacco ties and a spirit plate — a plate of food given as an offering to the deceased.

While police have said the remains of Morgan Harris and Myran are believed to be at Prairie Green, Normand said the family wanted to take the opportunity to honour both landfill sites.

Cambria Harris said the ceremony was a way to ask spirit guides for help.

“It’s important to ask our ancestors and Creator to guide us on this journey to bring these women home.”